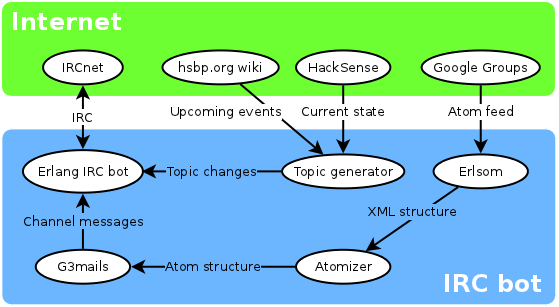 
The erlang IRC bot is responsible for communication with the IRC server. It manages the lifecycle of the plugins by starting them after the connection is established, and sends them a quit message, when the bot is about to shut down. The bot handles only the core IRC-related functionality, such as startup, responding to keep-alive messages (PING) from the server, and shutting down when receiving the appropriate command from an authorized source.


After startup the bot iterates through the list of plugins and initializes them via their ircmain function. It passes them a Pid and a list of plugin-specific parameters supplied by the user. This Pid can be used to interact with the IRC connection, such as sending channel messages or chaning the topic. The ircmain function returns a Pid, to which the bot sends a quit message when the bot is about to shut down.

Messages exchanged between the plugin and the bot


The topic generator is responsible for generating the channel topic based on the state of HackSense and the hsbp.org wiki. After startup, it spawns a process, which monitors the aforementioned sources, and if any of them changes, it constructs the topic (only if both of them returned valid information at least once), and send it in a topic message to the bot. The plugin exits from this loop when it receives a quit message.


The hacksense module handles the extraction of data from the HackSense REST API, and parses the state information in CSV format. This module is also responsible for converting it into a human-readable string format.


The event module handles the extraction of data from the hsbp.org wiki via a Python script. Python was selected for this sole task, because the BeautifulSoup module could easily parse invalid markups as well. Later, the BS parser was replaced with LXML because of its performance, simplicity and "well-maintainedness". The event.py script returns the next event via standard output, which is read in the event module already in a convenient string format. If something goes wrong in the Python script, the following things can happen:


Because of these circumstances, the string will be non-empty if and only if the Python script ran and parsed the events successfully.


Both the HackSense and hsbp.org wiki queries are done in separate processes, so if anything goes wrong, it doesn't affect the bot nor the plugin.